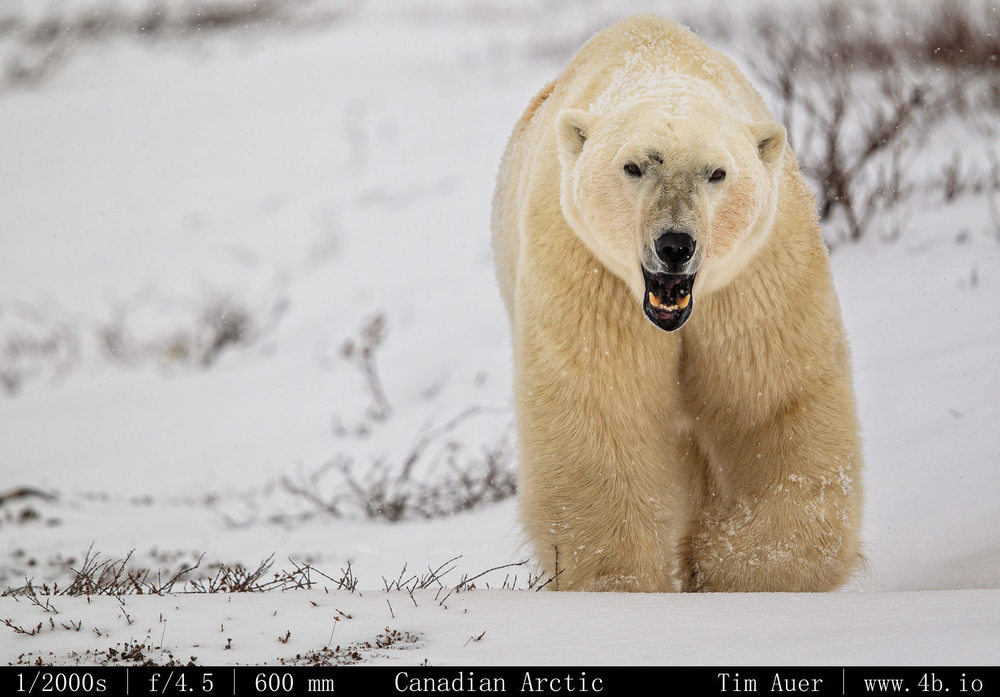 This trip was about the polar bears, followed by arctic foxes as the next objective, with a small hope of some auroral activity.  Though expectations for the Northern Lights were low given Churchill 98% November cloud coverage.  The trip produced good results for all three.

Getting there
All things considered, Churchill is moderately easy to reach, given its remote location and being the gateway to the Canadian arctic. It is not as easy to reach as a place like Yellowknife, but the connections from Winnipeg to Churchill on Calm Airlines are frequent, start early and end late.  These convenient timetables allow you to maximize your time there, if you are so inclined. For me, when I go on vacation I tend to squeeze as much as possible out of each PTO day.  The trip to Churchill was probably my most efficient trip to-date in terms of maximizing my efficiency.  I arrived at Winnipeg at midnight, got some sleep, was flying to Churchill first thing in the morning (06:30), and searching for polar bears by 09:00. The return mirrored my arrival in the sense that I left Churchill at 20:00, and had a 06:00 flight out of Winnipeg.

Rented a Jeep Patriot from Tamarack Rentals.  It gave a solid performance for the most part, but still left room for improvement in important several areas. The first complaint is we couldn’t lock the four-wheel drive differential, even when we disabled the ESP. Which seemly defeats the purpose of having 4-wheel drive.  The windows are small and there isn’t much vertical, which made it difficult to handle large lenses.

In terms of changing tires in polar bear country, we learned that the important thing to keep in mind when doing this type of activity, is to remain aware of your surroundings.  It is easy to become fixated on the task at hand. Specifically you focus your eyes downwards on the tires and underside of the vehicle.  You want to solve the problem and be on your way, as quickly as possible.  The problem with this approach is that you are often ignoring your surroundings.  In Churchill, this introduces an entirely new level of danger, the land of white bears on white land and white sky.  Constant awareness and guard must be taken to avoid a bear surprise. And they seemingly pop up out of nowhere….

This is why I repeated the following Inuit Proverb over and over in my head:

“The bear that traps you, is the one you didn’t see.“