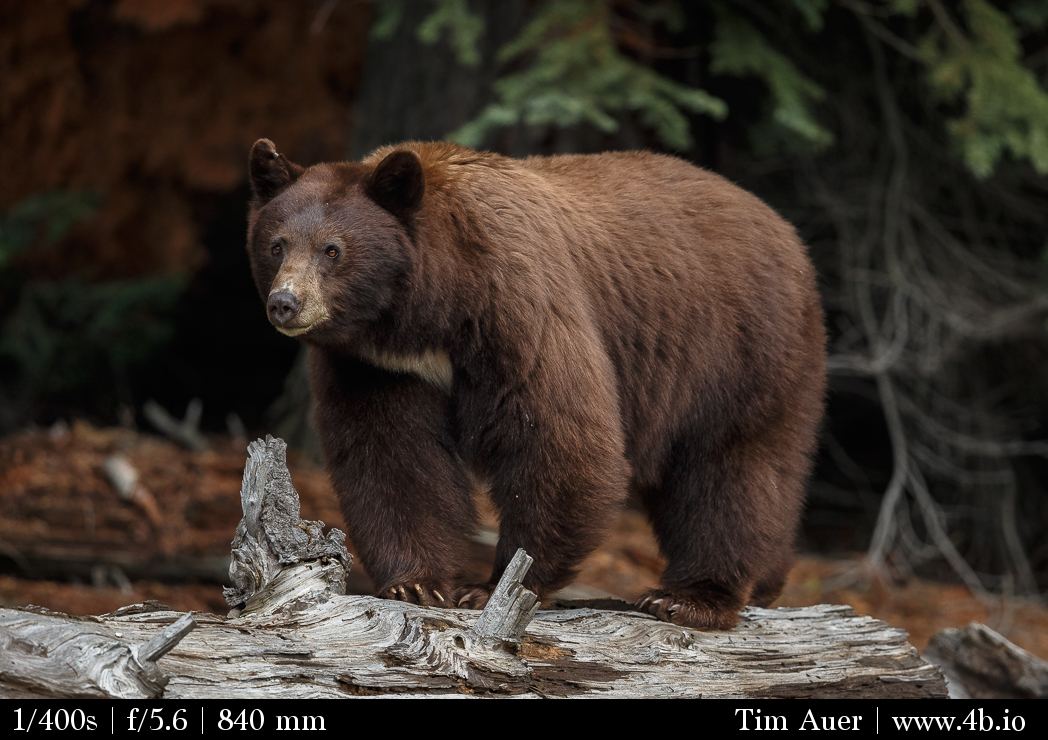 As I am apt to do before a big trip, I try to get into the right mindset and hone my skills as much as possible.

With an Alaska trip centered around brown bear photography at McNeil River State Park set for early June (less than two weeks away), it is important to ensure you are in top condition for bear photography.   Additionally, it was Jenna’s first time seeing a bear in the wild AND doing bear photography.   The single day trip to Sequoia National Park was wildly successful. Not only did we see bears, but we were able to get close to bears, and photograph them doing what bears do.  It was wonderful practice for McNeil River.

And while the american black bear is a different species from what we will see in McNeil, and has different behaviors and environments, it is still a bear, and within the genus ursus.

When considering all 50 US states, California probably jumps out to the casual observer as the most “bear proud” state of them all. Their flag brandishes a grizzly, the top state universities’ have grizzly bear mascots, and California’s extremely short-lived independent nation was named the “Bear Republic”.  Given all the love there seems to be for the California grizzly bear, it is somewhat astounding that this subspecies was extirpated by humans.  Hunted completely to extinction, the California Grizzly lives only on the flags and mascots.

But I am not writing about California grizzlies here. I am writing because California still has plenty of bears; albeit the less ferocious and smaller type: the American Black Bear.

When comparing brown vs black bears, many people may shrug off a black bear sighting in a location where both inhabit (such as Yellowstone or Glacier NP), some even consider it as being the less interesting species, unworthy of their attention. The black bear is more common, has wider distribution, and can be a nuisance (especially in the Sierras). The grizzly is rarer, requires a larger range, and is more dangerous.  Given all of my past trips to Alaska devoted to brown bear photography, I am also guilty of this too…but it isn’t for my lack of love for the black bear.  Yes a black bear is more common and more accessible than a brown(grizzly) or polar bear, but the bottom line is that Black Bears are difficult to photograph.

A black bear is not typically a bold animal.  Among all the large north american predators, the black bear is probably only behind the mountain lion in terms of “shyness”.  This species does not like to be seen by humans. This characteristic makes it especially difficult to achieve top quality photos.

The behavior of some of the bears we observed this past past weekend in Sequoia National Park was mixed in terms of typical “flight initiation distance”, but the relative abundance of bears present, and gave good odds of making quality images…